A change in the law means that from September 1st , all UK viewers of BBC iPlayer need to pay a £145.50 license fee, regardless of which services they use. The UK's TV licensing body says it will crack down on those using iPlayer without a license but in reality that will be an extremely difficult task. For those using a VPN, being detected will be all but impossible.

To legally watch broadcast television in the UK, viewers need to buy a TV license. Currently, one of those costs £145.50 per year but there are signs that the numbers of those investing in one have been dwindling.

Aside from the usual license dodgers, some people have legally chosen not to buy a TV license due to increasing volumes of BBC programming being made available on its iPlayer streaming service.

The iPlayer is split into two types of service – live TV and catchup. People viewing live TV, BBC1 for example, have always needed a TV license. However, those watching only catchup TV have been able to do so without parting with £145. This morning all of that changed.

“You must be covered by a TV Licence to download or watch BBC programmes on iPlayer – live, catch up or on demand. This applies to any device and provider you use. Don’t forget, you still need a TV Licence to watch or record programmes on any channel as they are being shown on TV or live on an online TV service.”

With the so-called “iPlayer loophole” closed from a legal perspective, eyes are now turning to how this can possibly be enforced. To do so properly, the BBC could provide license payers with a password and username to log into the service. Instead, however, the BBC has chosen to maintain its trust-based service, shown in the image below. 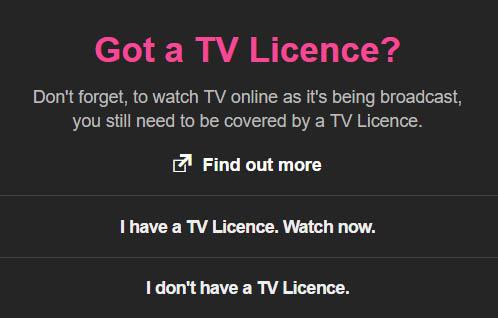 Simply clicking “I have a TV License. Watch now” is all that’s required to access the service and it’s expected that at least hundreds of thousands will do so without having an appropriate license. So what enforcement options does the BBC and the UK’s TV Licensing body have?

“We know the vast majority of people are law abiding and would anticipate those who need a licence for the first time will buy one,” a TV Licensing spokesperson said today, adding:

“We have a range of enforcement techniques which we will use and these have already allowed us to prosecute people who watch on a range of devices, not just TVs.”

Just as they have been for decades, TV Licensing are deliberately vague about the options available to them, but one thing they won’t be doing is spying on the traffic flying around people’s home wifi networks. That rumor began to circulate earlier this month but the reporting was both sensational and inaccurate. That’s not to say there aren’t options available though.

In ordinary circumstances, anyone who connects to the iPlayer service does so via an IP address allocated to them by their ISP. At this point, the BBC often has a clear idea of which ISPs are being used and the rough geographic location of the IP addresses accessing their service. Useful perhaps, but not particularly so.

Even if your IP address is static (doesn’t change) and you do (or don’t) have a license, TV Licensing and/or the BBC have no easy way of matching that IP address to a TV License payer. Indeed, the IP address they know accessed their service could belong to almost anyone.

Only complicating matters is that a TV license covers an entire household and all of the people in it, regardless of what device they’re using to access the service. Indeed, many IP addresses could be covered under one license. Some of those IP addresses, used by mobile phones for example, could be in an entirely different geographic location.

These variables and numerous others mean that TV Licensing would have huge difficulty trying to use Internet technology to track down unlicensed iPlayer users in the same way that copyright holders might track down BitTorrent pirates.

While the latter knows for sure that no one has permission to be sharing files, the former has no idea whether there is a licensed person behind any IP address. On that basis, getting a court to force ISPs to hand over details would be unlikely, if not impossible. Even if that did happen, the chances of the person having a license or some other mitigating circumstance would be extremely high indeed.

But of perhaps more importance are the chances of TV Licensing and the BBC even trying. By their own estimations around 94% of households have a valid TV license, which means that around the same percentage of UK IP addresses accessing iPlayer are doing so legally. That is not a particularly good starting point for weeding out pirates.

But for those who are truly cautious (or simply using one anyway), accessing the iPlayer from a VPN service is also a possibility. In tests carried out this morning, a properly licensed TF tester accessed iPlayer from three separate VPN services without any issues whatsoever.

Not only did UK-based IP addresses work, but an overseas one too, meaning that foreign users who aren’t eligible to buy a license might also gain access to the service. Indeed, properly licensed UK viewers can also view from a foreign IP address which might initially appear unlicensed. It’s a minefield.

So in conclusion, it seems unlikely that the BBC or TV Licensing will be enforcing illegal use of its iPlayer service in any different manner than it already does for conventional TV.

All households without a license will be gathered into a database and presumed to be TV license dodgers. They will receive letters in the post warning them that not having a license is illegal. However, unless they get caught in the act of viewing, there’s little that can be done to stop them. TV Licensing has no power of entry.

Finally, catchup services offered by other companies other than the BBC aren’t covered, so people can watch ITV Player, 4OD, Demand 5 and any other service such as Netflix without needing any license. That being said, a TV license is just £3 per week and is hardly going to break the bank.

Watch all the Winter Olympics action on BBC iPlayer starting on the 4th February from wherever you are in the World… https://t.co/u0Ic32Vh36

My Expat Network
@MyExpatNet
The Guinness Six Nations Rugby returns to both #BBC and #ITV this February giving the tournament a huge terrestrial… https://t.co/EDBcb6UUOY

My Expat Network
@MyExpatNet
Wishing all of our many subscribers around the world a very happy new year and we hope 2022 is kind to us all !… https://t.co/VTlL7kyrHQ

My Expat Network
@MyExpatNet
Merry Christmas and a Happy new year to all of our subscribers around the world. Watch all your favourite Christmas… https://t.co/0wHpKN25wN

My Expat Network
@MyExpatNet
Watch the Baba’s play Samoa at Twikkers LIVE on BBC ONE from wherever you are in the world with our easy to setup U… https://t.co/gFMrfx7fam